Posted on September 3, 2015 by jannielund 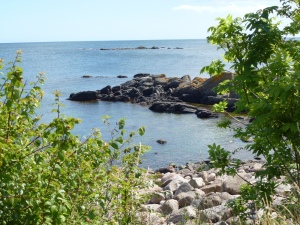 The obvious thing to do would have been to write a book in my native language, Danish. Before I got that far, however, and started wasting my time, I took a look at the market. It was, and is, full of murder mysteries and celebrities with the urge to tell their life stories. I’ve never been much of a fan of either genre, so there was no allure in plotting (fictive, mind you) murder and inventing yet another burned out police detective to solve the crime.

In Denmark, romance authors such as Nora Roberts (my go-to pusher for a feel-good romance on a rainy afternoon) have no place in bookstores. Nope. You get your romance fix at the gas station along with the glossy magazines and the politically incorrect packet of smokes. And that was the genre I wanted to dive into as a writer.

Guess how many Danish publishers seek manuscripts for books to sell at the gas station?

I couldn’t find any either.

An editor at one of the major Danish publishers said a few years ago that to be published in Denmark, you either have to write murder mysteries or be famous. It made me want to move to another country.

So what was a Danish romance writer in the making to do?

First I dabbled a little in short stories. Danish ones for old-fashioned Christmas anthologies, which have a long and proud tradition here, but are dying out. Then I tried my hand at a children’s book with a bit of a mystery touch. Neither was satisfactory because I wanted to be writing something else. So I finally thought “what the hell” and dived into the deep end. I’d write myself a novel, and I’d write it in English so I at least had the option of submitting it to a publisher who wouldn’t just laugh in my face and tell me I’d wasted my time.

To my luck, I’d been writing in English before. If I hadn’t, the project might have seemed too enormous. English is my second language, but apart from a short stint in Ireland, I’ve never lived it. It’s been a class at school, a TV show, a book. Even now, almost six books later, switching back and forth between languages can trip me up.

The rest is history, though. Three published novels, writing my sixth at the moment. The scenic route has had its share of hills and valleys, a roadblock here and there, and some of the most beautiful landscape I’ve ever seen. It’s not always as easy as writing a book in your own language and submitting it to the first publisher you think of. Sometimes it’s forcing hurdles, having to get creative, and believing in yourself even when no one else does. (Just imagine how may people have shaken their heads at me over the years.) But—and it’s a big but—I’ll swear to my dying day that the harder the road you have to travel is, the more you’ll enjoy the destination. Like my grandma always said—no one ever said it was going to be easy. She didn’t say that it would be worth it, but I’ll add that for her.

Taking the scenic route is always worth it.

And that, folks, answers the question of why I write in English. So stop asking me.

Romance author with a tendency to take on too many projects. Creativity junkie.
View all posts by jannielund →
This entry was posted in Writing and tagged books, Danish, English, Jannie Lund, publishing, writing. Bookmark the permalink.